EXCERPTS FROM AMERICAN DREAMER: A LOOK INTO THE LIFE OF MY FATHER, JOE BABY POSTSCRIPT  PT. 2

Well it was a great week, but it took me more time getting my land legs back than it was getting situated on-board. Then there was the return travel time and throw in a little bugaboo to deal with, so things are starting out little slow here.

I wish everyone could enjoy a good film, movie while on the high seas. It was a great opportunity to leave on a cruise sponsored by TCM and Disney, two of the foremost icons of keeping and preserving, creating movies and entertainment that touch the heart and the soul and spirit of humanity.

It was 8 days of being truly transformed; the closest thing next to being in Hollywood. The crew and the staff and TCM were just so hospitable from Ben Mankiewicz, all the guests; Jerry Lewis, Leslie Caron, Kim Novak with her paintings not just her acting career, Michael York, Lucie Arnaz, Dick Cavett and Alex Trebek. Some of the other people who I met included Scott Eyman, noted best-selling author and bibliographer, Bruce Goldstein, film restoration expert, and the wonderful staff that helped me during my stay on the ship.

I will never forget them; to be able to post the blog; “Postscript,” that appeared last week and what I’m conjuring up the next few weeks. So, I hope you can feel being part of this also. Setting the stage for providing a wonderful commentary for my Dad’s, “American Dreamer: A Look into the Life of My Father, Joe Baby, A memorable story of man on a mission.”

Let me take you back to the cruise for a couple of memorable situations as I mentioned to you last week.  Alec Trebek, the mastermind of Jeopardy all these years was part of the festivities. Not seeing him in person before I was not sure about if I would recognize him but I was looking for Scott Eyman who I had met on Sunday, the night before when he introduced the program for the movie directed by John Ford, “My Darling Clementine,” a western about Wyatt Earp with Henry Fonda and Victor Mature. The movies were presented by the special guests and Scott Eyman was very well-renowned for being a best-selling author and particularly of noted biographies such as John Wayne and John Ford and Robert Wagner; I was hoping to catch-up with him again. So, I meandered to one of the theaters where he maybe found for one of his one assignments about John Ford.

I noticed what looked like Alex Trebek in the entrance way which seats about 100 people. The film was playing, it was being narrated and noticed that it seemed almost at the end. I hear these words and was just riveted at what I was hearing. The movie showed what looked like an old mining town and it happened to be in England. “Men like my father cannot die.”

I wasn’t sure of what movie it was and I was at the exit way and the narrator in the movie, Huw Morgan (the son played by Roddy McDowell) says “Men like my father cannot die. They are with me still, real in memory as they were in the flesh, loving and beloved forever. how green was my valley.” As I said, I wasn’t familiar with the movie and I went up to this gentleman who I realized was Alec Trebek. I was overwhelmed at this sound track as it came from the film. I said I’m writing a book about my Dad and this is exactly what has been resurfacing, that my Dad will live forever; it’s just was too much. I said what movie is that from and Alec Trebek’s explained that it was from  “How Green was My Valley.”

Well after the movie was over and Mr. Alex Trebek was off on the side working on his upcoming presentation, I went over to him and reintroduced myself as the man who asked him about the movie that I’m writing about my Dad. He was gracious enough when I asked him about writing something for my sister and brother-in-law who watch his show religiously. Matter of fact, they were at a taping of Jeopardy in Washington. He signed the back of the card from one of the postcards from the upcoming book release… And here is the autograph, my sister with her cute comment  when I sent her the copy, “how come he didn’t ask it in the question when he wrote it,” which was an interesting after thought.

My sister just happened the night before on Sunday asked if I could get Alec Trebek’s autograph, which seemed far-fetched at the time but here he was; a true gentleman as you would imagine from how he is perceived watching him on television all these years. He signed it: For Bonnie and Lee, All the best !, I reiterated about Dad’s book and presented him with an American Dreamer postcard. 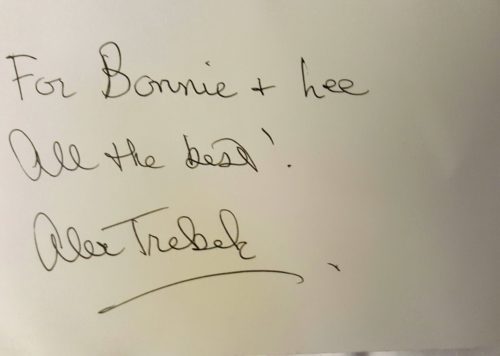 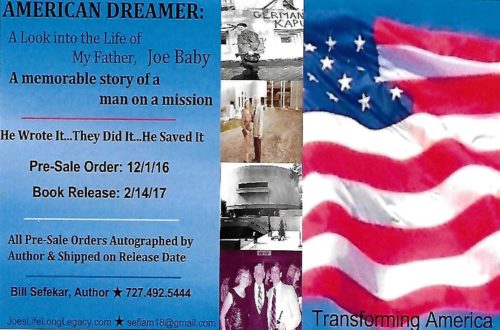 Well naturally I went back, Googled the movie and found quotations that came from the movie, is a novel written by Richard Llewellyn: How Green Was My Valley. Very profound, not just about the reference to My Dad. Here are some other noteworthy passages that are strikingly worth getting imbedded in your consciousness.

“Men lose their birthrights for a mess of pottage only if they stop using the gifts given them by God for their betterment. By prayer. That is the first and greatest gift. Use the gift of prayer. Ask for strength of mind, and a clear vision. Then sense. Use your sense. … Think long and well. By prayer and good thought, you will conquer all enemies.” ― Richard Llewellyn; Author; How Green Was My Valley

Huw Morgan:  [Narrating] “Memory…Strange that the mind will forget so much of what only this moment has passed, and yet hold clear and bright the memory of what happened years ago; of men and women long since dead.”

Mr. Gruffydd: You’ve been lucky, Huw. Lucky to suffer and lucky to spend these weary months in bed. For so God, has given you a chance to make the spirit within yourself. And as your father cleans his lamp to have good light, so keep clean your spirit… By prayer, Huw. And by prayer, I don’t mean shouting, mumbling, and wallowing like a hog in religious sentiment. Prayer is only another name for good, clean, direct thinking. When you pray, think. Think well what you’re saying. Make your thoughts into things that are solid. In that way, your prayer will have strength, and that strength will become a part of you, body, mind, and spirit. 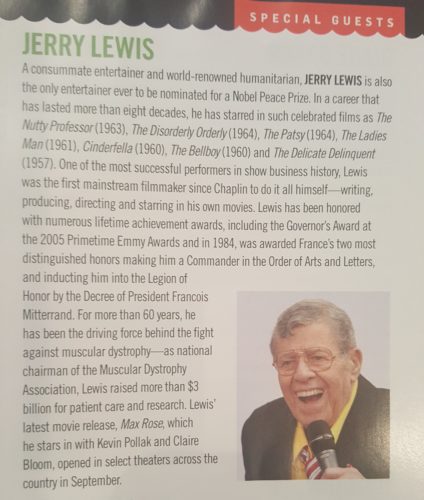 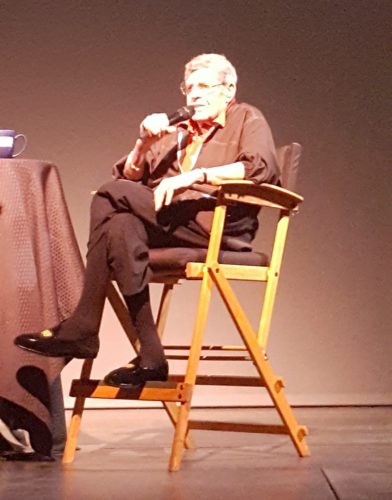 It sort of set in motion several things that unfolded on this cruise that locked me in to trying to give copies of my first book, with inscriptions included. As it turned out copies of the Postscript blog that is featured this week and previously the Epilogue, were included courtesy of the Guest Services Staff. It became a startling adventurous scenario that fueled possibilities of something happening in publishing the book. 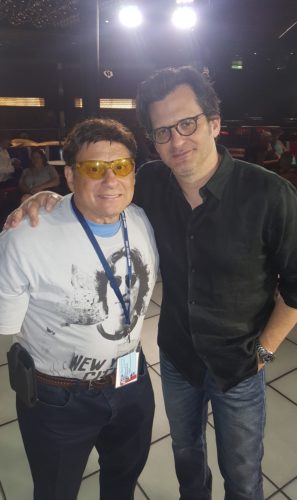 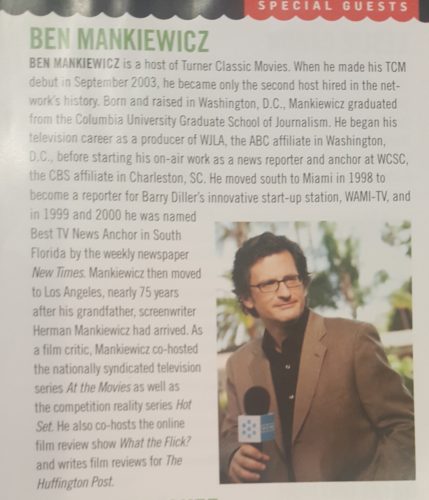 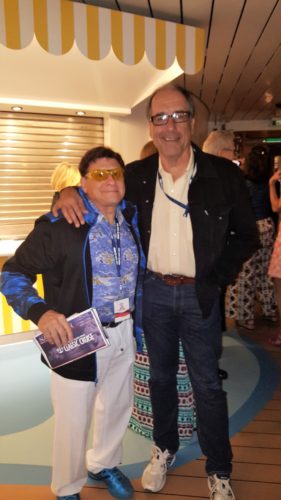 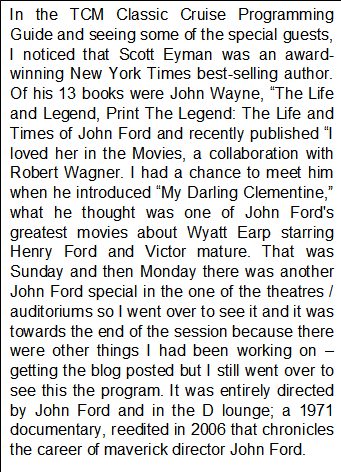 It turned out to be a work/vacation. I could provide Jerry Lewis, Ben Mankiewicz and Scott Eyman copies of my first book with pertinent inscriptions.  It explained that my second book about my Dad’s life is worth they’re looking into and provided them with copies of the last two blog postings; the Press Release announcing the upcoming “New Book” to give them a sampling. The Press post card was also in the Packet, explaining what’s happening as part of the plan as we are preparing for pre-sale, allowing people to show an interest. If you have been following the excerpts in the book, we realize more than ever your comments are very valid; would love to hear from you. 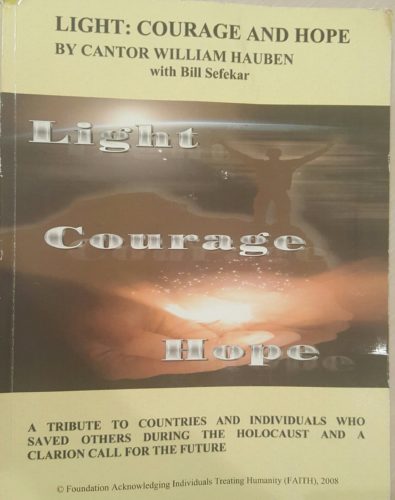 Now back to the book, one of the things that was a major objective was presenting memorabilia about the life and times of Joe Sefekar’s for almost 100 years; that was his job and he did it admirably.. It seemed fitting that when the St. Petersburg Times back at the turn-of-the-century; the 21st century that is; the paper is now the Tampa Bay Times, a big hullabaloo about Y2K for those of us who remember how it was affectionately referred and to the new millenniums. As the days got closer to December 31, 1999 there were major concerns and plenty of information and resources to deal with the unexpected. We are offering a capsule summary that was collected every day as part of Joe Sefekar’s century countdown starting on Friday, September 24, 1999 from the year 1901. He continued for 99 days saving the Newspaper clippings as he so tactful did for a life-time. It culminated of course on Friday, December 31, 1999 with beginning of the new millennium. The following is just a few of the over 75 years that we have during this period. We will be presenting this Century montage (with the complete set) for your interest and capsule summary that spans the decades that were a good part of Joseph and Thelma Sefekar’s life. 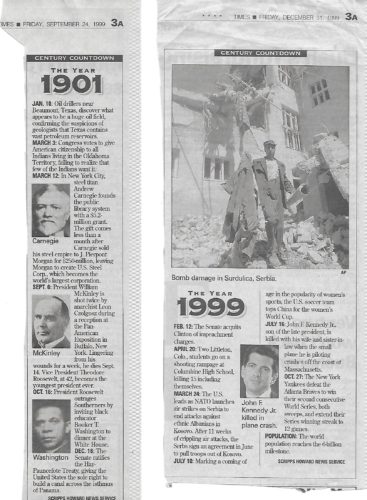 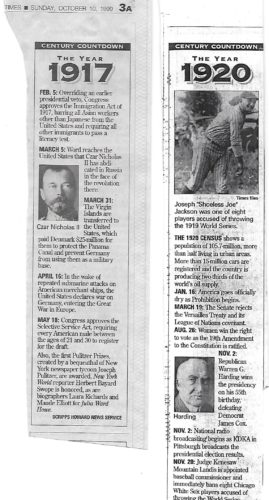 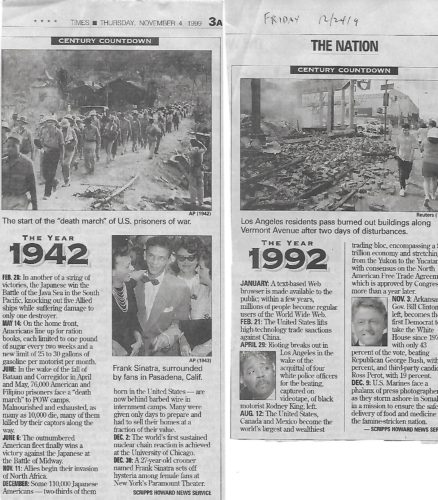 Needed to get this blog posted today (Tuesday) so I decided to provide viewers with additional book material on the next update; sprinkled with photos and even some videos from this wonderful cruise. Included are stops at a Butterfly Farm in San Maarten and a Rainforest on horseback outside of San Juan, Puerto Rico; Enjoy!! 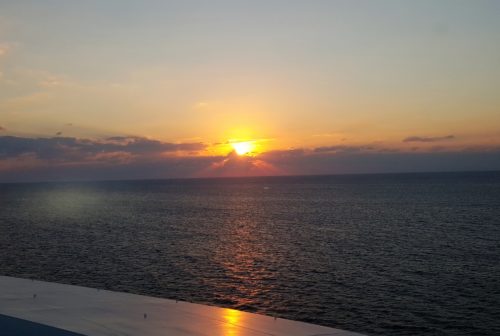 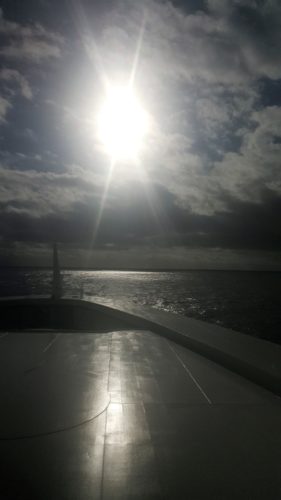 One thought on “POSTSCRIPT: AN AMERICAN DREAMER: A LOOK INTO THE LIFE OF MY FATHER, JOE BABY, PT. 2”