EXCERPTS FROM AMERICAN DREAMER: A LOOK INTO THE LIFE OF MY FATHER, JOE BABY REFLECTIONS PT. 1

Well we’re really getting close to the finish line and it takes a lot of work while the effort is expanded and I’m really concentrating on editing the book. Also critical at this time is determining the best way to present it, print it, publish it, and this is where my major time constraints are focusing.

However, I still find in folders amazing things that my Dad wrote and collected but I guess the next few postings will concentrate on just giving our readers an amazing compilation of what Joe Sefekar considered important enough to write about and save about. As I mentioned before not all of it can fit in the book and maybe they’ll be able to find its way in some kind of website to keep this available after the book is published. There are video clippings, sound clippings and a lot more that may be made available should the interest prevail.

However, there have been so many wonderful “reflections” and stories over the past 11 months covering almost 40 blog postings to give you an opportunity to pause and reflect on Joe Sefekar’s words and wisdom’s. So, if you have the time to revisit and enjoy some of the past postings that you might have missed, or you may want to catch up on and even refresh your memory, go right ahead.

Okay, so let’s get started:

I found this in a folder that had at least 200 song titles and descriptions. 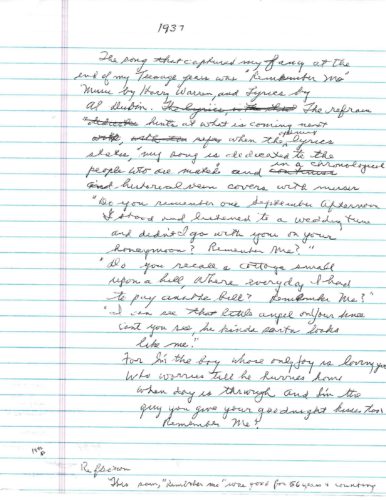 Figure #R.1 Handwritten Lyrics from “Remember Me,” by Harry Warren and Al Dubin, – A Lover’s Refrain 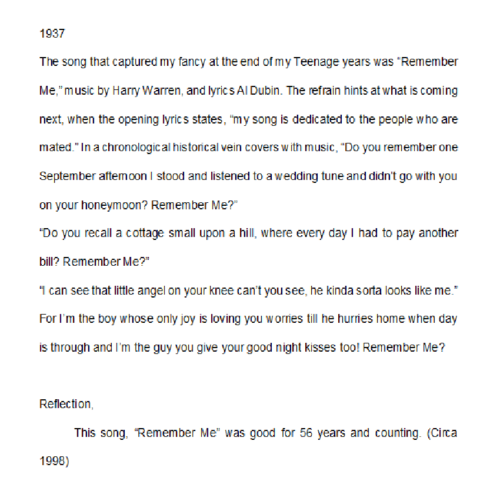 Figure #R.2 Lyrics from “Remember Me,” by Harry Warren and Al Dubin, – A Lover’s Refrain

The Next set of text and letters deal with the European theater in World War II that Joseph Sefekar was very much a part of as a result of his being assigned to the First Army Rear Echelon Headquarters. As the end of the war was rapidly approaching, which ended on May 8 with the surrender of the Third Reich; also known as V-E Day; Victory in Europe.  There were critical communications between General George Marshall head of all military personnel both in Europe and in the Pacific with Supreme Allied Commander of European Forces, General Dwight Eisenhower. This determination was made to bolster US forces in the Pacific with the announcement of the First Army being deployed to the Pacific for mounting the attack against the Japanese Empire on the Japanese homeland. Also to be presented in future blog postings are documents marked “secret”  that was forwarded to General Eisenhower three weeks before the war would end in Europe. 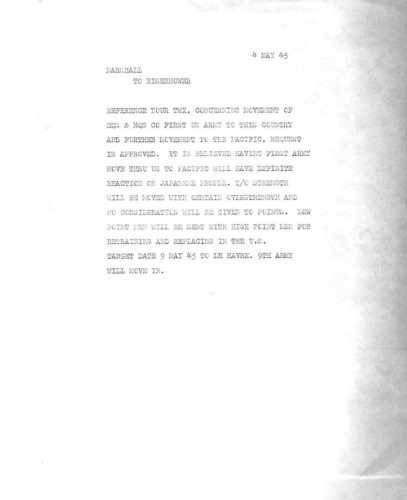 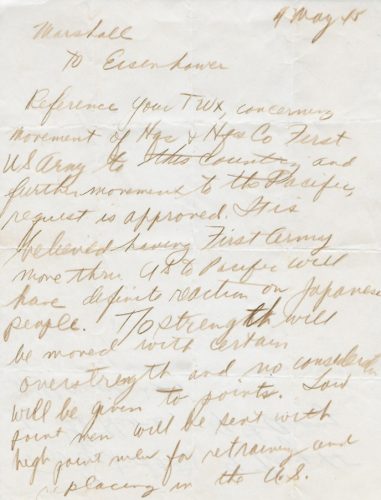 The letter written below is to my dear friend Jake, an old war buddy. It sets in motion my resolve to find out any additional information that would help in re-creating what transpired over 50 years ago before, when we fought and defeated the Germans in Europe. I tried to contact as many of my war buddies as I could, especially since time was creeping up on us. This would become one of my major missions, jotting down my/our experiences during the war.  There were plenty of letters, memorabilia, documents even pictures that would become a key focal point in my life. 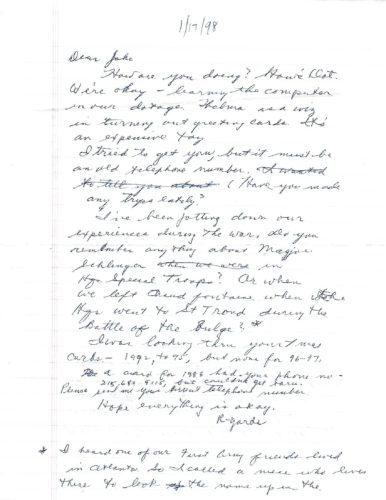 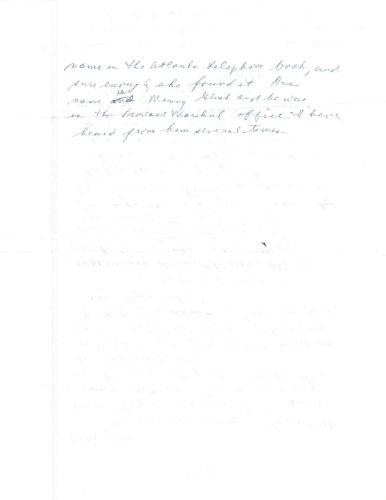 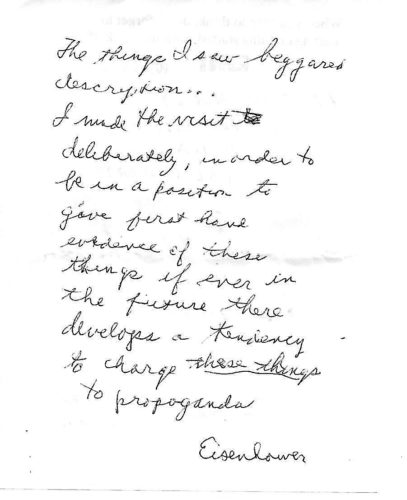 “The things I saw beggared description… I made the visit deliberately, in order to be in a position to give first hand evidence of these things if ever in the future there develops a tendency to charge these things to propaganda.”  –  Gen. Dwight D Eisenhower

Figure #R.5 Hand written notes that were a result of General Dwight Eisenhower’s determination to make sure that the horrors of what he witnessed as the Allied Troops liberated German Concentration camps would not be erased. More details and accompanying pictures appear in Chapter 4, Marriage and the War, Part 3

An article in the Wall Street Journal was published on August 25, 1999 by Elyse Tanouye, “Clues to a Sudden Attack on the Mind,” I found particularly timely. It deals with what all seniors become sensitized to. The writer talks about how scientists believe the process for natural pruning brain cells connections are essential for handling the explosive growth of information in a person’s formative years. Pruning helps makes the brain more efficient and flexible for handling the changing mental needs of adults. Grant it, that some of this material is rather complex when talking about the brain as seen in the article from the pictures and descriptions of neurons and neurotransmitters, etc. However, it is worth delving into when confronted with today’s massive influx of information, data and the explosion upon the mind and senses not just for those changes taking place in the human brain as people enter early adulthood. It is equally important for the whole spectrum from our beginning and also dealing with the vulnerability that also comes in later years and the induced stress is not just confined to those that would be at risk early on. The thinking processes need to become more efficient. And certainly, in today’s society much more pressure is being exerted and as the demands come greater, it is important that family support systems and other similar related structures also become stronger. 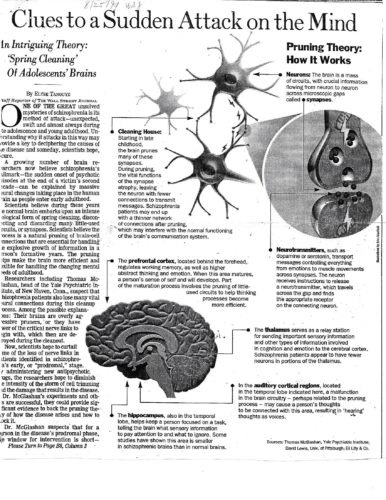 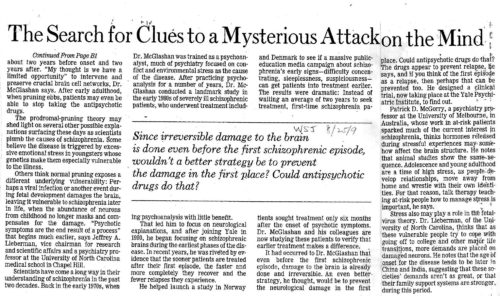 Figure #R.6 Article by Elyse Tanuoye, ” Clues to a Sudden Attach on the Mind”

Naturally being a prolific writer all his life it was extremely important for Joe Sefekar to be not only succinct in his elocution but to write legibly so that his supervisors, staff and as the years progressed all the wonderful letters, prose and dissertations for posterity would remain easy to understand.  As has been demonstrated, the hundreds of pages for the manuscript as well as letters, documents that are presented show this accomplishment.  The reason we mention is the following example. Joe Sefekar followed from the earliest recollections a priority to write legibly. These basic fundamentals were taught early on during his impressionable years, not so now.  Today penmanship is not only a lost art it is almost not even a required subject. Here is an illustration of how he would go about passing this on. Equally important was being steadfast about keeping family and friends to be in command of more than just adequate vocabulary.

This practice of drawing continuous circles was used to develop better handwriting skills. No doubt his granddaughter Beth Landau also agreed and followed in her Grandfather’s footsteps, so to speak, with what may be considered mundane exercises but would eventually pay off. 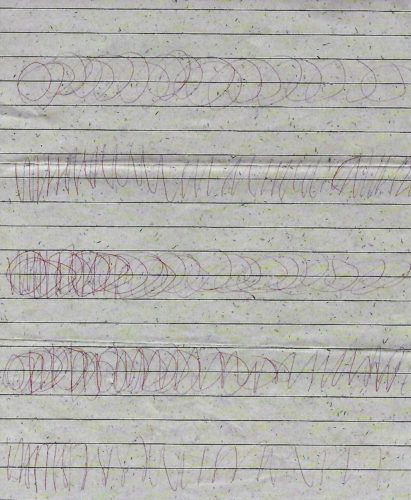 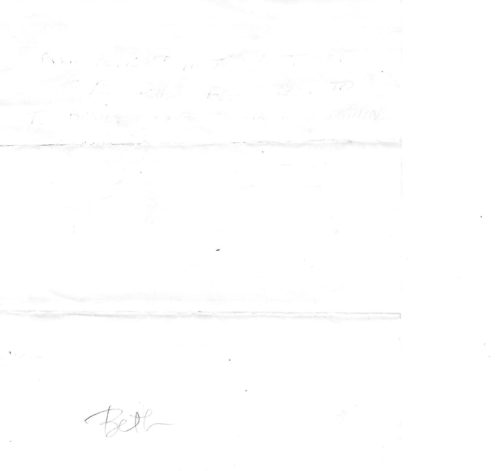 A firm believer in the old school of good penmanship, Joe was always ready to practice and impart this “Lost Art.” Here is a practice sheet from granddaughter Beth,

Figure #R.7 One of the exercise drills that Beth Landau would practice to improve her handwriting.

The following is the Press Release that provides details on the expected Release for the book. It explains what we have presented our viewers over the past 11 months and hopefully will be an exciting portrayal of a man who made a difference with his life. A man who is worth finding out about, who will give the reader thoughts to ponder over and words to live by. 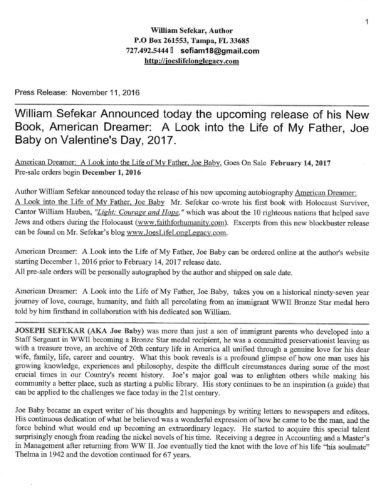 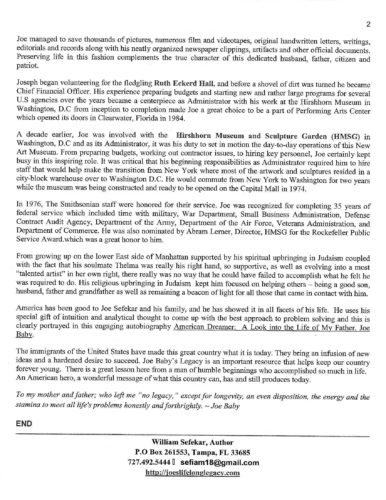 Figure #R.8 Press Release Announcing the Upcoming Release of “American Dreamer: A Look into the Life of My Father, Joe Baby, A Man on a Mission; He Wrote It, They Did It, He Saved It.”

In the upcoming Blog posts we will provide readers the opportunity to take advantage of presale purchases of the book and offer other incentives so that you can receive especially packaged first edition copies.