With Arnold leaving on his two-week business trip, I was in the day Arnold left. I set about my duties. My first step was to analyze the feasibility report prepared by Coopers & Lybrand, (C&L) CPA’s. Utilizing a report prepared for the Van Wenzel Hall in Sarasota, the estimates prepared for that facility were not applicable to PACT. The C&L estimated a requirement of seven personnel positions for PACT, not realizing that the Van Wenzel Hall was receiving personnel support from the City of Sarasota; neither did they consider that services support, such as electricity, gas and water costs, were also covered by the city. There was no Tampa Performing Arts Center. It wouldn’t be in the planning stages for another 10 years; 1991.

With the revised estimates applicable to the PACT operation, the number of personnel required was 30; and the support services were costed out for actual reimbursement by PACT. With the expenditures categorized by cost and quantity, the next step was determining revenues. As previously discussed with Arnold the best method to use in calculating revenues based on available seats in the percentage of seats filled at each showing. Applying the criteria that Arnold had developed over his many years of experience, I came up with not only the revenues for one season but extrapolating five years into the future. This is what was accomplished in the two weeks Arnold was away. When he returned, I convinced him that the breach and following his orders, could be excused by the end justifying the means. Arnold showed his appreciation by increasing my salary to $10 an hour. But the increase in salary was overshadowed by the beneficial turn of events.

A short time after preparation of the five-year budget, a meeting of the Board of Trustees was convened at the premises of the Clearwater Federal Savings and Loan Bank to discuss the financing of the construction of the Performing Arts Center. The initial construction cost was estimated at $13 million; $8 million had been raised through private contributions by businessmen, corporations, individuals, and the balance of $5 million was to come from a bank loan to be repaid from revenues.

Also in the works were the applications I prepared for any funds from the National Endowment of the Arts which I was familiar with working in Washington with Hirshhorn Museum; the part of the application below. 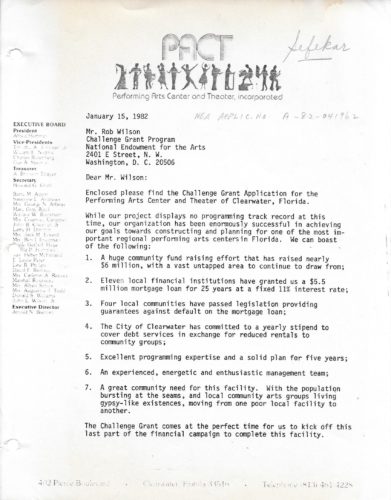 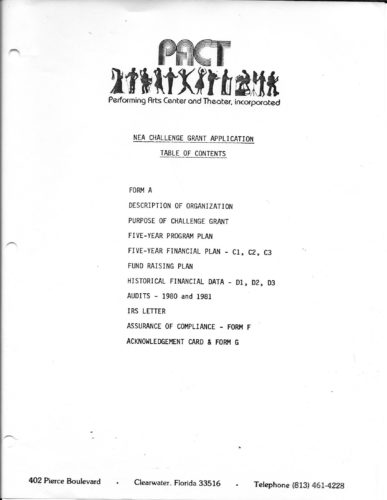 The afternoon of the meeting, I got a call to deliver a copy of my Five–year plan to the Clearwater FS&L (**Five-year bank loan application and approval). Although by this time I was the Finance Officer, I had not been invited to the meeting, probably because the initial planning had been done by the Board, and the consortium of banks who were approving the loan had their specialist at the meeting. My responsibilities which grew as the plans developed, were very similar to my Hirshhorn duties. My finance duties expanded to personnel, recruitment, purchase of furnishings and equipment, and supervising the accounting staff. The box office was equipped with banks of computers which we used to issue the count lists thousands of tickets, from which various revenue reports were based. My son who just moved to Florida and was in the computer field gave me a crash course in computers; maybe not the right choice of words as computers are known to “crash.” 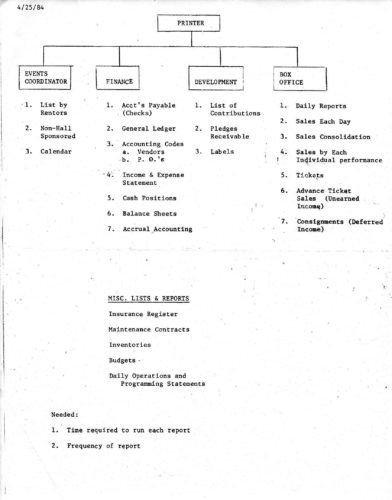 It was a simple process to train our personnel in the intricacies of the computer and none of us could foresee the expansion of the computer in our daily life. Mr. Bremen, putting his best foot forward assembled one must consider a blockbuster opening season. He created a Performing Arts Center that was destined to be one of the best-known in the southeastern United States. Our backstage manager, Dan Willy, put together a team of electricians and stage hands that did a fabulous job of providing a great backdrop to the worldwide entertainers that were performing. The sound system was the best available state-of-the-art equipment.

In 1982, Thelma and I took one of our overseas tours to Greece. In a way was similar to our trip to Israel when we visited the Tel Aviv Museum and Sculpture Garden, at the time of the start of my association with the Hirshhorn Museum. This time, our tour took us to the ancient city of Epidaurus, in Greece. We made an interesting stop at a huge open air amphitheater with rough-hewn blocks of stone, which were the seats in an uncovered circular building. What was unusual was the acoustics. Our guide remained below in the center of this large open-air building while we were all seated in various locations 25 or 30 rows above him. He spoke in a low-pitched voice, which we all could hear clearly, although we were a long distance from him. Could there be some valuable connection between how clear the sound quality created 3,000 years ago and applying it to the clarity level in the modern-day “amphitheater.”

When I returned back to the office, this experience was recounted to the PACT house communiqué “The Impressionist”, and served as a comparison of the ancient sound techniques used in enhancing sound projection, and the comparison to the modern state-of the art. 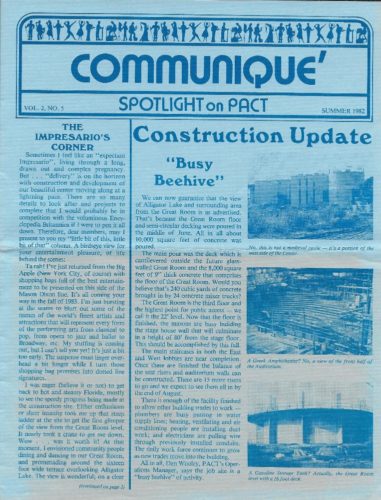 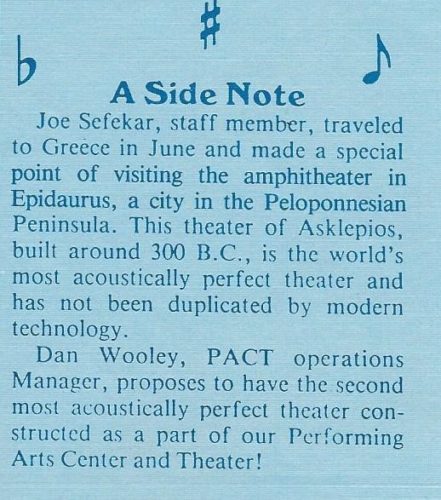 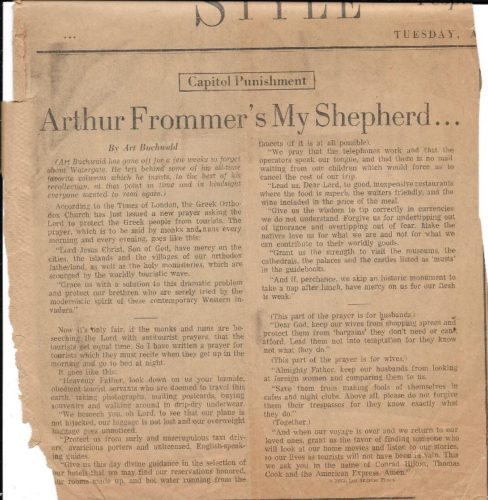 Coincidentally there was an article from the famous satirist Art Buchwald out of Washington mockingly titled “Capital Punishment.” In this particular entry is one of his all-time favorite columns.

“And the it was excerpted from the Times of London and accordingly the Greek Orthodox Church has just issued a new prayer asking the Lord to protect the Greek people from tourists. The prayer, which is said by monks and nuns every morning and every evening goes like this:

The good Lord should have mercy on the cities and islands and villages of our Orthodox fatherland as well as the holy monasteries which are scourged by the worldly touristic wave.

“Grace us with a solution to this dramatic problem and protect our brethren who are sorely tried by the modernistic spirit of these contemporary Western invaders.”

The column goes on by saying it’s only fair if the monks and nuns are beseeching the Lord with anti-tourist prayers that the tourists get equal time.

“We beseech you, oh Lord, to see that our plane is not hijacked, our luggage is not lost and our overweight baggage goes unnoticed.

“Protect us from surely and unscrupulous taxi drivers, and avaricious porters and unlicensed, English-speaking guides.

“Give us this day divine guidance to the selection of our hotels that we may find our reservations honored, our rooms made up and hot water running from the faucets (if it is at all possible).….

(This part of the prayer for husbands.)

“Dear God, keep our wives from shopping sprees and protect them from ‘bargains’ they don’t need or can’t afford. Lead them not into temptation for they know not what they do.”

(This part of the prayer for wives.)

“Almighty father, keep our husband from looking at foreign women and comparing them to us. “Save them from making fools of themselves in cafés and nightclubs. Above all, please do not forgive them their trespasses for they know exactly what they do.”

“And when our voyage is over and we return to our loved ones, grant us the favor of finding someone who will look at our home movies and listen to our stories, so our lives as tourists will not have been in vain. This we ask you in the name of Conrad Hilton, Thomas Cook and the American Express. Amen.”

The trip wasn’t as bad as all that, as may have been inferred from the “endearing” article. It was actually a very special trip, we took it with my brother Al and his wife Edna complete with cruises and a visit to my family’s ancestral homeland in Salonika. It’s hard to imagine my parents sailing from there 65 years ago. Here’s a picture of Thelma and I having a nice dinner on the cruise (**photos, itinerary and highlights of our trip to Greece to appear). 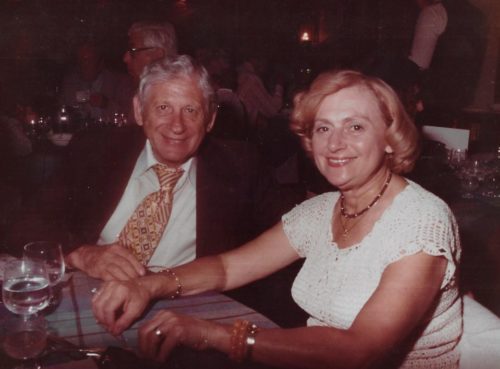 Figure #11.10 Dinner with my honey while on our Greek Trip

When we got back it was full steam ahead, the budget and the finances from the bank were approved in December.  So we had the green light; construction was also in fast-forward as seen from the pictures below. 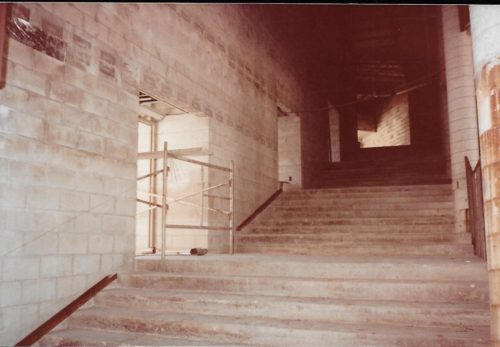 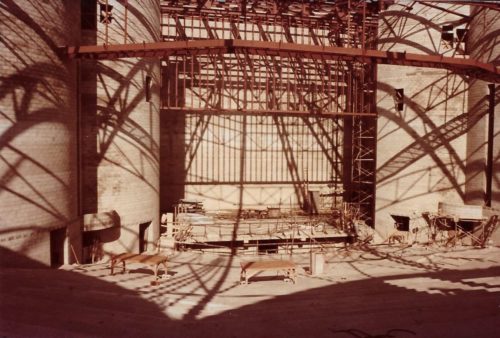 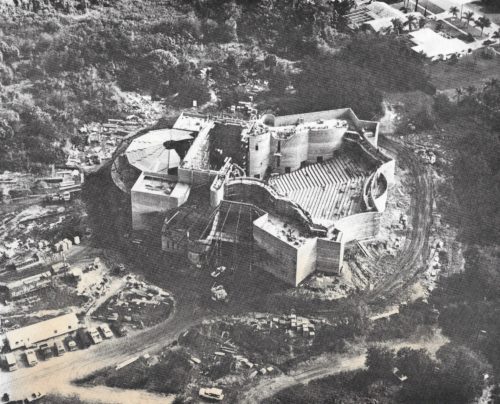 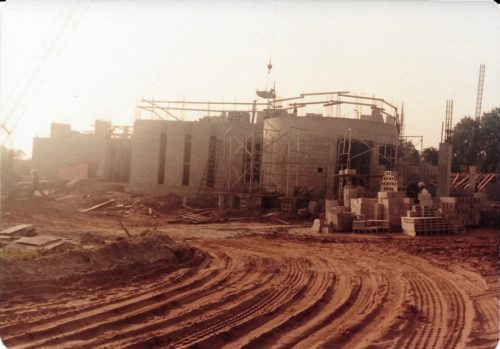 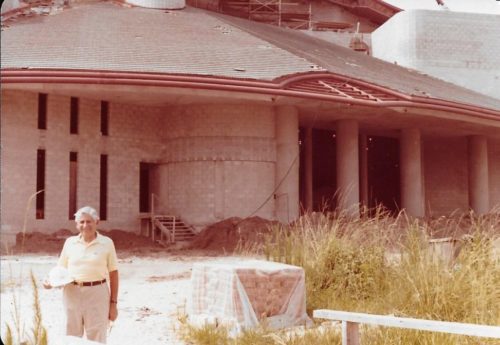 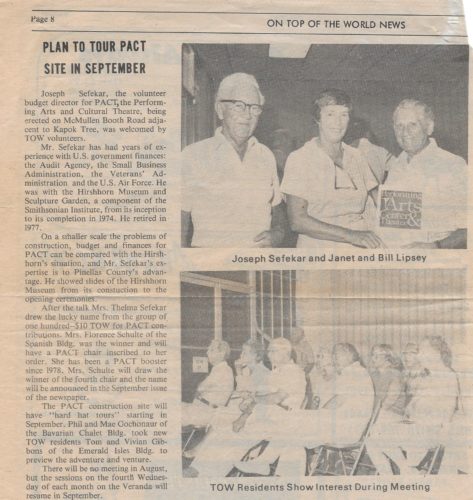 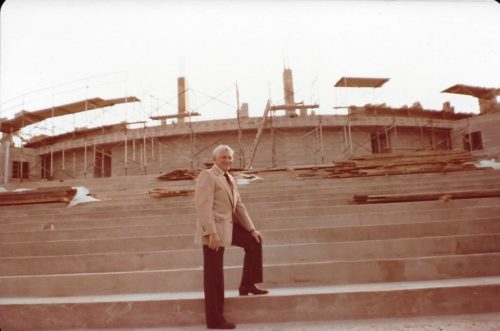 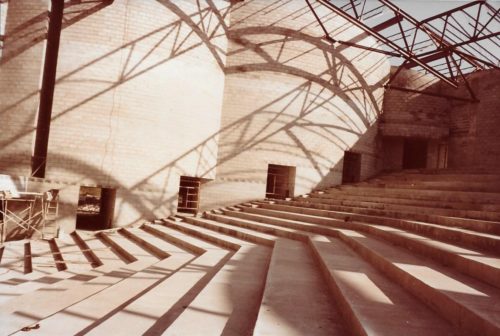 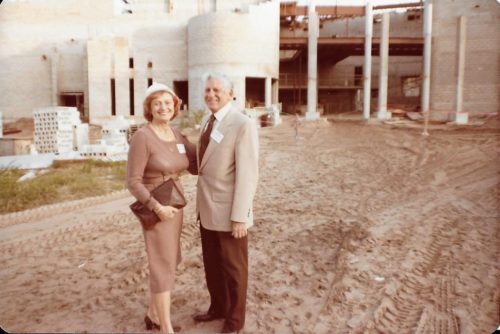 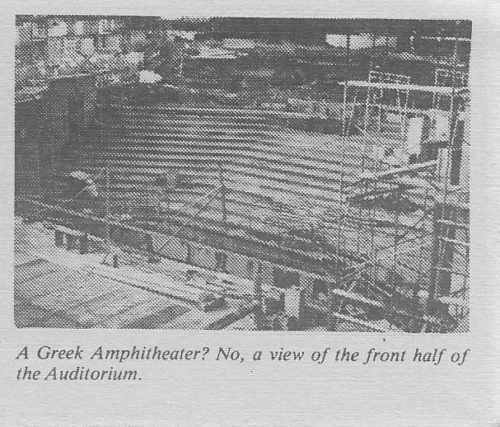 During this time, I had lost a very dear friend and mentor. Joseph H Hirshhorn passed away in Washington DC., in August. Mr. Hirshhorn was 82 years old and he played a very important role in my life. This is recollected earlier in the chapter on the Hirshhorn Museum’s Accomplishment. The News Release as well as the “Mountains and mountains of materials,” I have kept all these years are still fresh on my mind.

“The collection of more than 6,000 paintings and sculptures Mr. Hirshhorn gave to the nation in 1966 is housed at the Smithsonian institution’s Hirshhorn Museum and Sculpture Garden. It was a terrible loss to me that this person who meant so much for what he gave not just an incomparable gift but he was a beloved colleague and incomparable person even as an elderly man, his energy and enthusiasm and even his eccentricities with those of youth, middle-age years combined synthesized in bountiful amount of spontaneity and an energy and in the words of Sen. Patrick Moynihan was chairman of the Board of Trustees of the Hirshhorn Museum he left behind a national treasure is one of four men whose names are immortalized on the Capital Mall. He also leaves to his friends a fragile and precious memory that will endure as long as we endure. Our love and especially respect goes out to his widow Olga and his family. Mr. Lerner, director of the Hirshhorn Museum was an associate of Mr. Hirshhorn’s over 40 years. His phenomenal zest for life has deeply affected everyone, he will be profoundly missed. His spirit, though, will continue to touch the lives of this and future generations to the magnificent works of art he donated to the museum that bears his name. In the vitality, diversity and beauty, these works will be his truest memorial.”

There are many similarities between Mr. Hirshhorn and myself although not born of such a large family, he was the 12th of 13 children born in Latvia, Europe in 1899. He also came from an immigrant family that settled in Brooklyn and he appreciated the opportunity that this country had given him as is clearly apparent by his donating this massive collection of some of the major great works by pioneers such as Rodin, Picasso, Matisse, Calder and Moore, etc.

I had written a number of letters to Joe Hirshhorn and Olga Hirshhorn, since leaving the museum. My deep felt sympathies and consolation were forwarded to her as well as Mr. Lerner who I worked for at the Hirshhorn Museum. 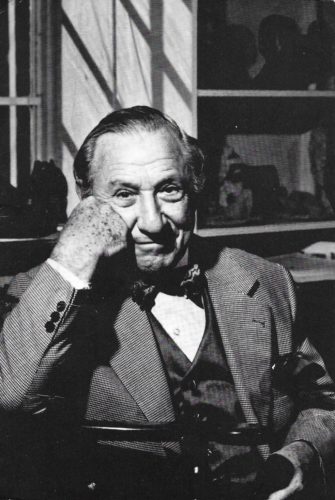 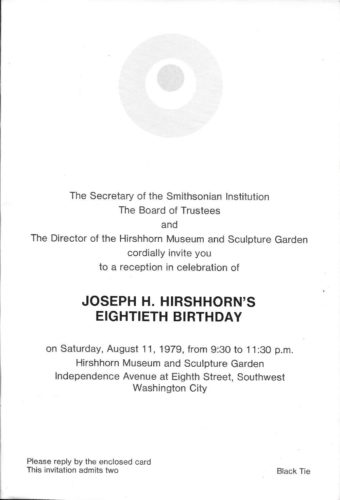 Figure #11.21 Cover of Card and Invitation for Mr. Hirshhorn’s 80th Birthday Celebration and Reception at his Museum

And so completes part two of the four part excerpts showing how this most anticipated Performing Arts Center on the West Coast of Florida came to be. Part three addresses the myriad aspects required to get everything ready for the grand opening in January of 1984.