It was amazing what Arnold with his staff put together for the greatest variety of entertainment that I have ever seen and Thelma and me were privileged to see the likes of Broadway while we were living in New York and in Washington at the Kennedy Performing Arts Center. And here we were in Clearwater, Florida on the West Central Coast of the State of Florida to have this at our beck and call. Bremen prepared the table perfectly as his “Sweets for the Spirit” captured the excitement and the tingling of this new venue. It was like being a kid in a candy shop, Thelma and I had a fantastic time picking and choosing the type of entertainment that we thought would be to our fancy. We’ll save this for the next part as Opening Night at Ruth Eckerd Hall (REH) would be looming large. And my son Billy was another one to have the benefit of the fruits of my labor. Because it wasn’t easy to give up what was such a big part of Thelma and our lifestyle that the Smithsonian and Hirshhorn Museum offered but this filled the void very nicely.

A problem we encountered in the construction was in setting up the parking lot. It was one of the finishing touches and getting ready for opening night, October 1984 (coincidentally 10 years to the day of the Hirshhorn Museum’s grand opening). The macadam parking floor was not fully completed – so we put a topping layer of tar. Well, the squishing and splattering resulted in a lot of unhappy theater goers with black goo on their cars and shoes. We had several complaints which were taken care of immediately and efficiently. We had to learn through experience that claims for injury kept cropping up of people tripping over carpets and stairs. Management didn’t know of this situation until we received an increase in insurance premiums from $1,700-$3,400.

It developed that the insurance company was paying off nuisance claims based on letters claiming injury and the company was not coordinating with our office. Review of one claim indicated the claimant, age 86, requested restitution because her injury did not allow her to work. We tightened up procedures, which would require claimants printed forms, listing the type of injury and description of cause of accident. Our insurance cost continued to increase due to conditions in the insurance industry which were escalating in all aspects of insurance, i.e., Workers compensation, property and health insurance.

But back to the glitter, the money was coming in as part of the bank financing the loan construction, operation and things were moving along at a fast clip. It was a lot of excitement in the community and articles appeared on a regular basis. Our quarterly publication Communiqué explained progress on every aspect of the undertaking and the involvement of the entire City of Clearwater, Pinellas County and Tampa Bay area. Arnold from the “Impresario’s Corner” was definitely in his element. He thrived on this kind of fast action exploding environment, meeting and greeting, setting up a kaleidoscope of acts and entertainment for his budding cauldron of enjoyment, pleasing the adults and children of all ages.

The articles below clearly show how Arnold Bremen operated in getting things done and keeping money coming in. I was glad to be a part of this, keeping pace with him as part of my job, making sure a check book was close at hand. 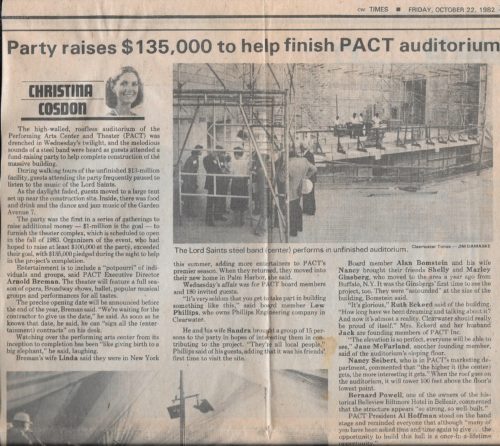 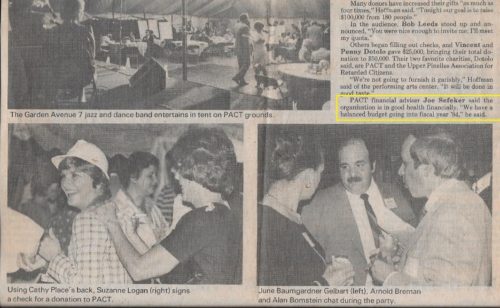 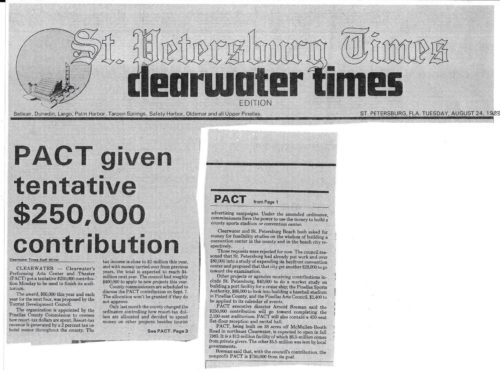 As seen from the scrumptious treats below on “Sweets for the Spirit,” 1983 Grand Preview in October was in full swing. With a delectable array of internationally renowned theatre, opera and dance. Stars the level of Ray Charles, Arlo Guthrie and Pete Seeger, Chet Atkins, Johnny Mathis, Plays such as “Amadeus,” Stars of the stage and screen, young and old people’s workshop. The list just kept on growing. 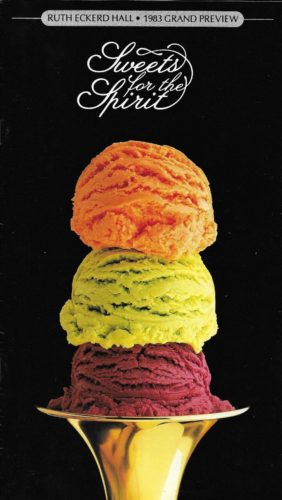 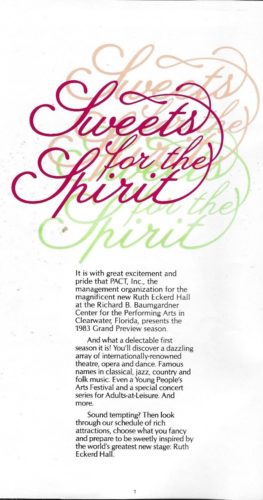 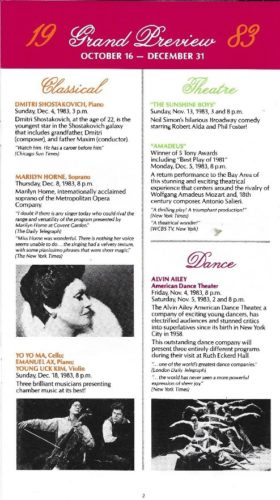 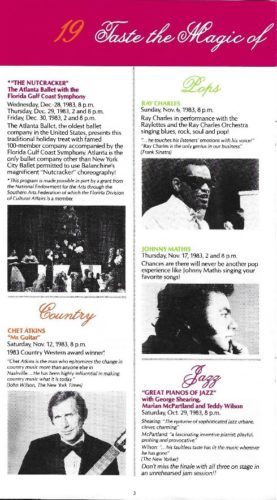 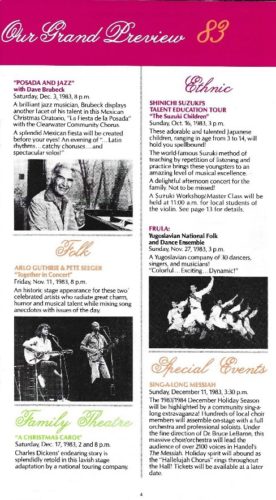 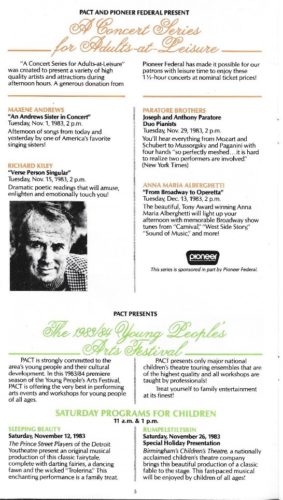 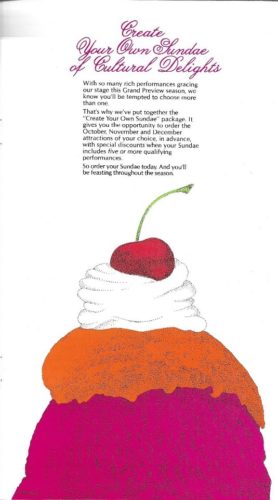 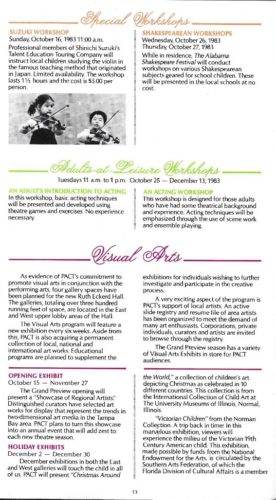 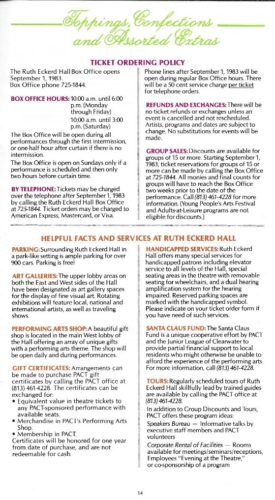 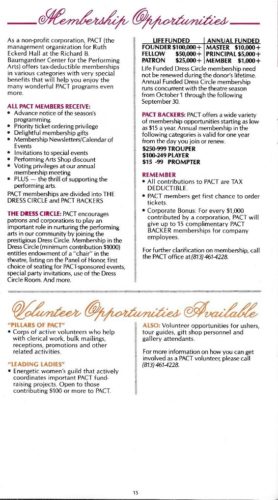 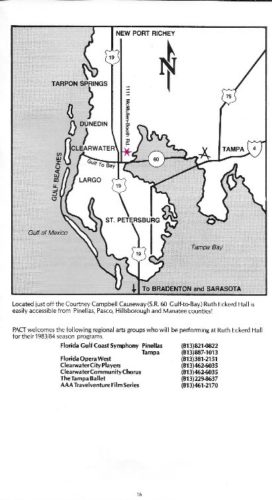 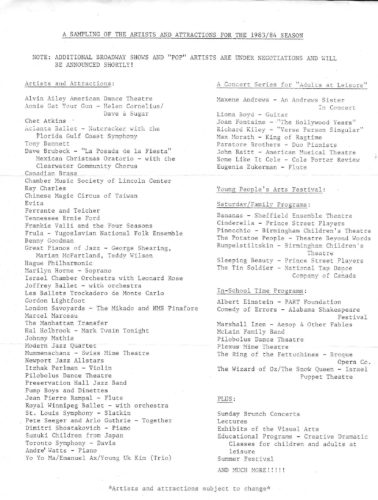 Thelma and I did our part in the mix and supported community efforts with our own contributions. The Dress Circle was one way of making this happen. 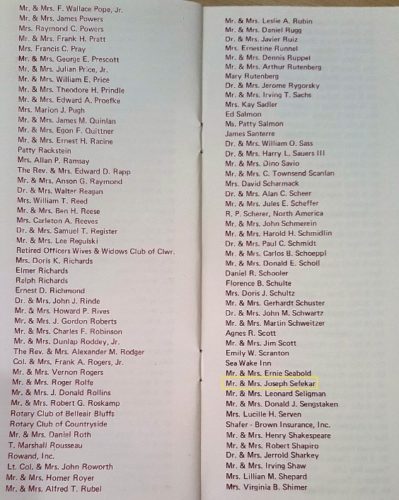 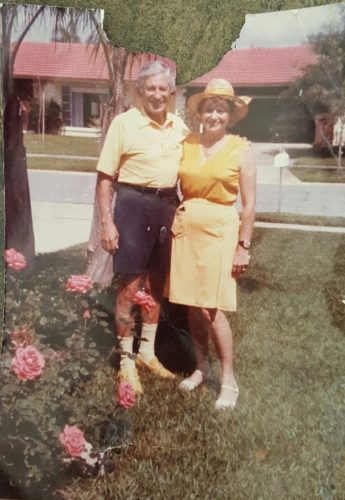 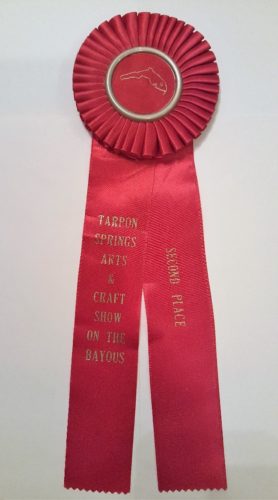 During this time, I did manage to keep my writing projects going, kept a lot of newspaper clippings and articles and worked on keeping in the forefront of activities at Temple B’nai Israel and with my wife’s family and sister, Renee who I mentioned lives down the block with her husband Harry. Renee’s daughter Sheila and her three kids; that was a lot of family, a lot of friends. We made some wonderful friends coincidentally one of the retired couples,Sol and Selma Schifman just happened to live across the way when we were living in Country Village on Long Island in Syosset. They were neighbors right across from my son’s best friend Bob Richards family lived facing the Schifman’s house. We really enjoyed their company and many other wonderful couples the friend such as Terry and Francine Kopackoff. This fellow is Russian but he lived in a very Jewish area in Brooklyn and he was very into all the cultural and the Jewish witticism, it was a wonderful time i.e. I kept the writing and one of my projects was that I wrote copious notes of our trip to the Greek islands, 80 pages on a pad that I transcribed and typed into 27 pages that I sent to my sisters and give them an idea of this wonderful opportunity that we had to visit my folk’s homeland. There even was a letter from one of my cousins who was older and knew of our family lineage who wrote me a couple of pages prior to our leaving explaining what had transpired in the early years and how mom-and-pop were able to work their way to the United States (**to appear in the book). 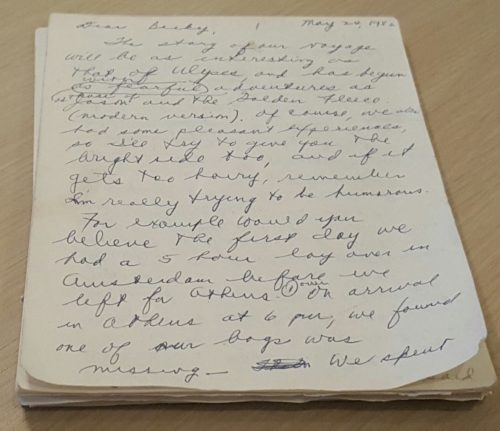 Also we had a very momentous event, my lovely daughter Bonnie and her lovely husband Lee Landau brought into the world a lovely Beth Eileen Landau on January 16, 1983. We were there of course and she was a wonderful addition to our family. Things are working their magic as a matter of fact, Beth will be getting married if we fast-forward to April 29, 2017 in Charleston, South Carolina. 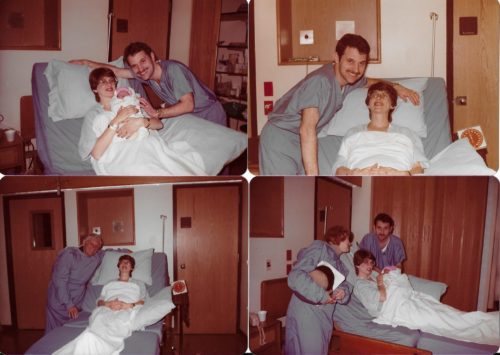 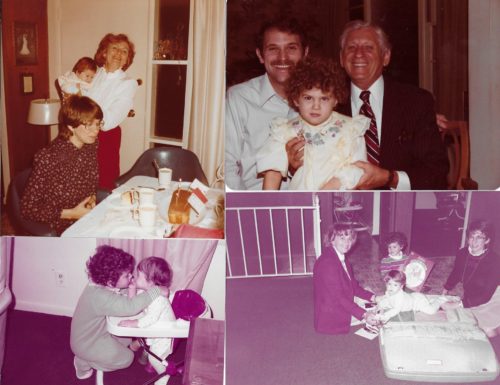 Figures #11.37 Getting used to the “New and Improved” Family 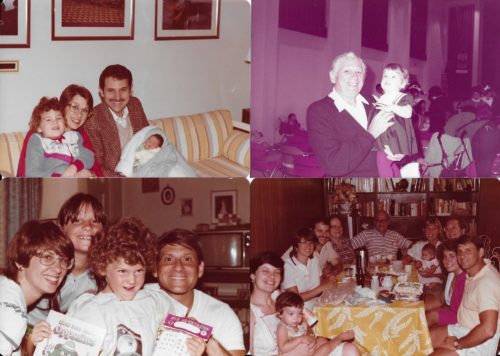 Two very notable events took place during this period. One was Thelma’s and my 40th wedding anniversary which took place at the very nice setting of the Holiday Inn on Clearwater Beach, January 3, 1982. Many of our dear family and friends attended this beautiful celebration. It was overshadowed 10 years in the future by our 50th celebration which even included a Caribbean cruise there would be a lot more good things to share before that blessed event. The other item which you “take with a grain of salt,” marked my 65th revolution around the Earth starting on February 20, 1982. Another reason to get together and “party” ha, but more important to feel very thankful and fortunate for all that, that has been bestowed upon Me. 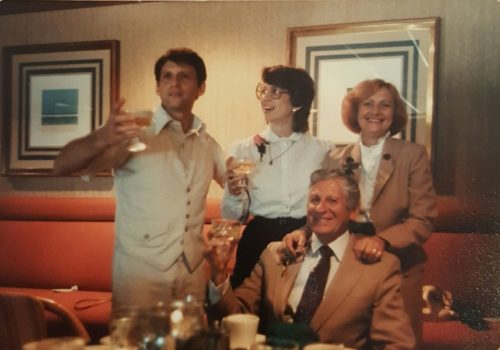 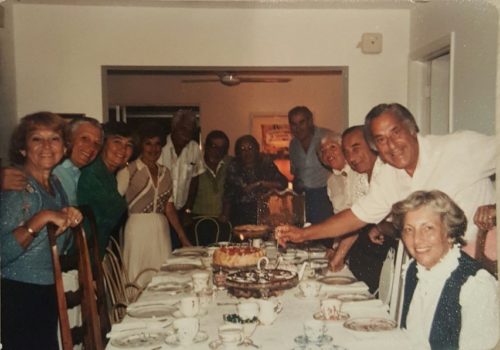 That dining room set is still going strong after 30 years.

And so concludes part 3 of the 4-part series for Chapter 11: Off-Broadway – Ruth Eckerd Hall Achievement. Part four will deal with the great, Grand Opening that rivaled the opening of the Hirshhorn Museum and Sculpture Garden in Washington DC, almost exactly 10 years prior to this. As well as My bowing out; Exit Stage Right.”