EXCERPTS FROM AMERICAN DREAMER: A LOOK INTO THE LIFE OF MY FATHER, JOE BABY POSTSCRIPT  PT. 3

Blog posting Postscript 3, Pt. 3 also turns the corner in that it includes video excerpts of the TCM Disney Cruise and includes trips to a Butterfly Farm in San Maarten and the Carabali Rainforest Park, in Luquillo, Puerto Rico. 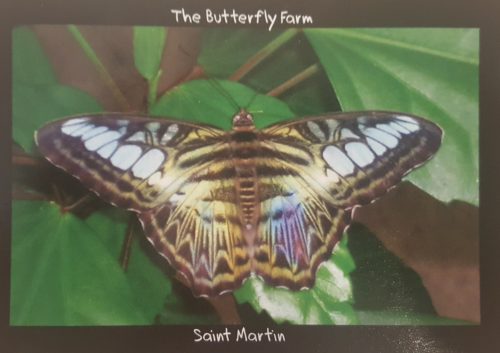 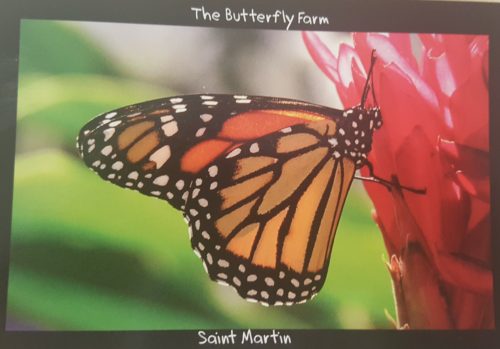 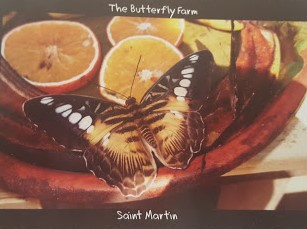 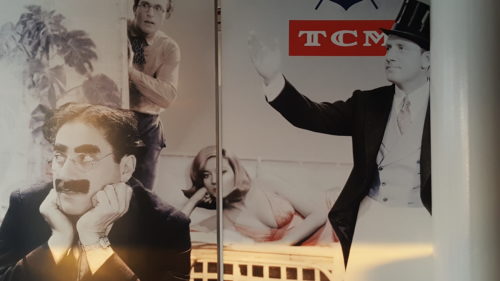 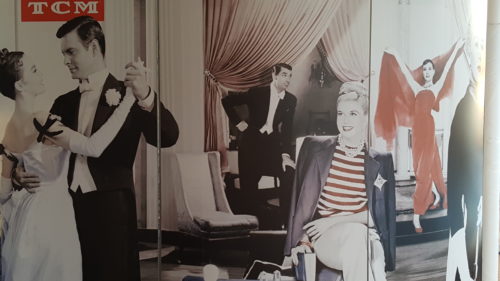 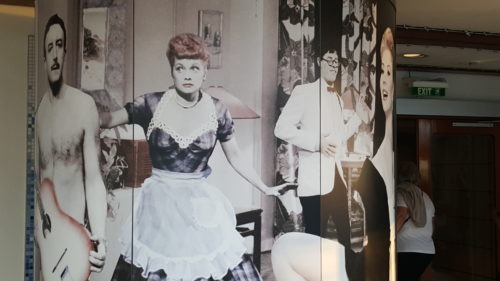 Figure #PS.24 Some of the life-sized murals that appear on the outside decks of the ship.

On board the Cruise was equally fascinating with continuous activities. Even while walking on the deck there was a lot going on. One time I noticed this artist doing charcoal drawings and had amassed hundreds of beautiful drawn pictures of well-known personalities and stars. Coincidentally, I was returning the same way and there was one of the TCM Host’s Illeana Douglas who appears on many of  the interviews. It just so happened that the artist had a drawing in his collection and showed Ms. Douglas who was enthralled with the likeness and even more appreciative when he signed the copy and presented it to her. 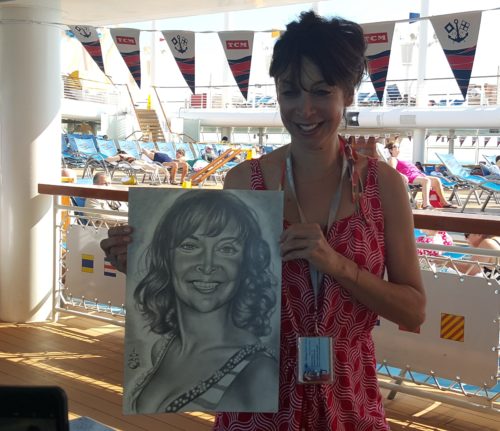 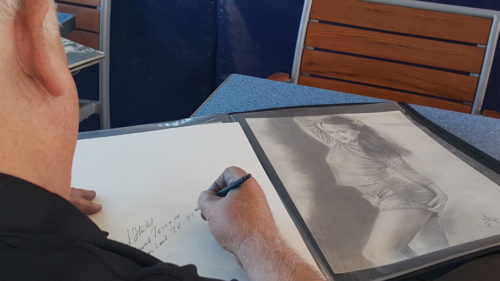 Figure #PS.25  and Figure #PS.26 Illeana Douglas receiving her Charcoal drawing from one of the masters who has created and catalogued hundreds of personalities and stars.

I really didn’t have too much time or money to indulge into the excursions available as part of the Cruise but was satisfied with the choices that were made. Please understand that I didn’t have the luxury of doing too much editing of any of the videos. It was a fun compiling assortment of the still pictures using YouTube and getting it into a video montage in movie maker and with public domain music for the background.

Also it’s worth mentioning that the Disney part of the cruise provided so much entertainment and enjoyment. The stick figure here was created in the dining area as we were getting ready for dinner. It was then ingeniously intertwined with the other guests similar artistic designs to come up with a really enchanting version to have our creations parading on the screen, while we were finishing our meal. 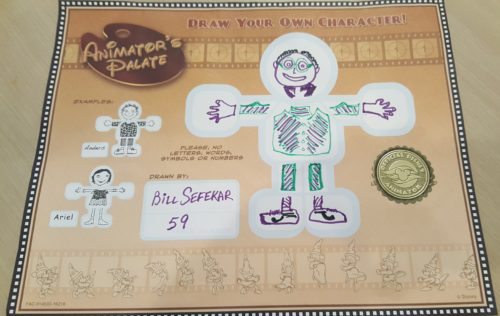 Figure #PS.27 Initial drawing which would be incorporated into the animated videos below.

Bill’s artistic endeavor is on the far right in blue. 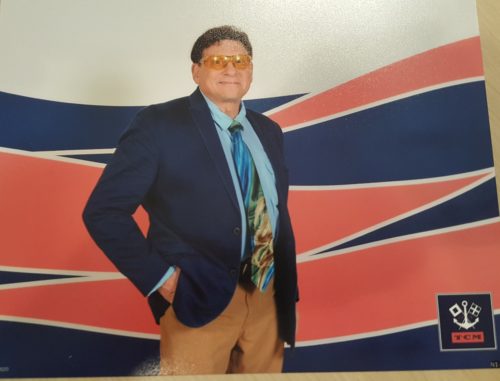 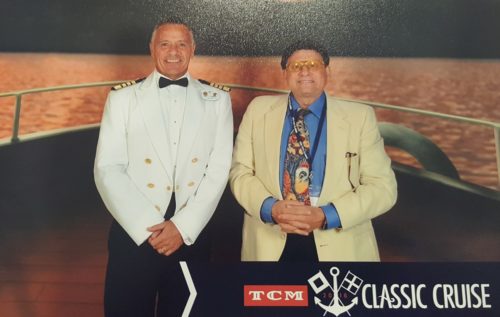 Figure #PS.30 Photos substantiating I was actually on the Cruise. The distinguished gentleman with me is the Captain of the Fantasy. Captain Fabian hails from Argentina. 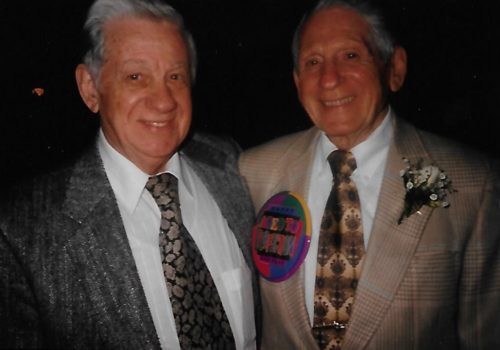 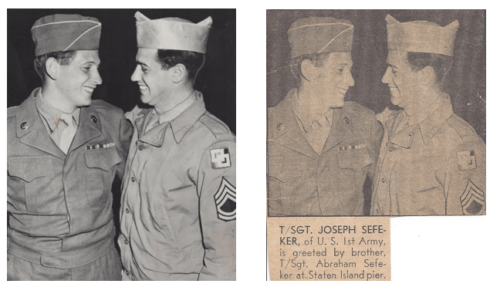 Figure #PS.31 One of the latest pictures taken with Joe and brother Al Sefekar.

Figure #PS.32 Famous Fighting Sefekar’s that appeared in the New York Newspapers on Joe’s return from service in Europe at the end of World War II.

More important is that it reflects on the ties that binds the Sefekar’s, Joe Sefekar and brother, Al. The Fighting Sefekar’s were close and continued a lifelong camaraderie and beautiful story that helped shape their family; their mother, father, four sisters and the extended Sefekar family. It also lends itself to include Joe’s in-laws which made up a large contingent on Thelma’s side with her mother, five siblings; four sisters and brother.

There are many things that transcend life here on earth and what better way of showing the enormity of it,  as in these special yearly summaries that were part of anticipating the millennium going from the 20th century to the 21st century. Aside from some of the years that were milestones in the lives of Thelma and Joe Sefekar and their family, we hope to be able to present the entire century of highlights. Last week our viewers will recall an also abbreviated version of this montage that was posted. Let’s have another look back at some of the amazing events as they unfolded 25, 50, 75 and even 100 years ago in the years that played a major part in our lives. 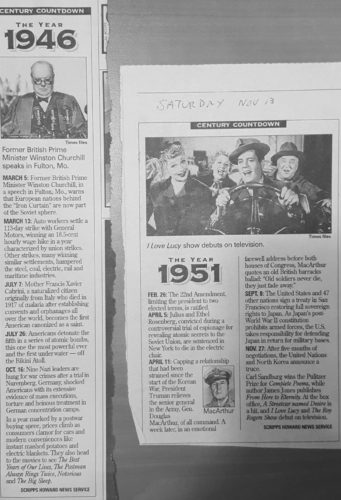 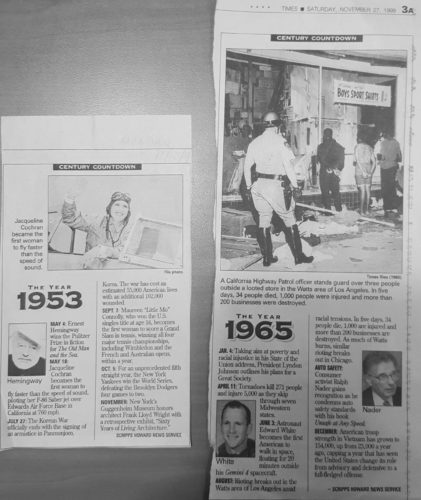 Figure #PS.37 Century Countdown, 1984; 10 years after the opening of the Hirshhorn Museum in Washington, D.C., Grand Opening of Ruth Eckerd Hall Performing Arts Center in Clearwater, FL. Played a part in both of these major events. 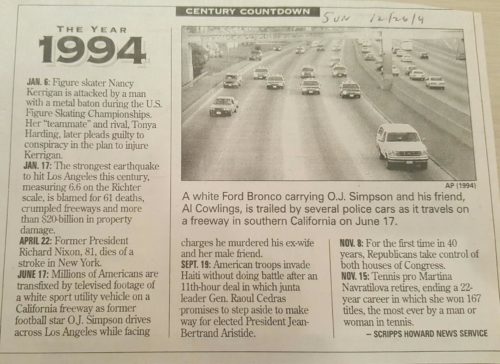 Figure #PS.38 Century Countdown, 1994, 50th Anniversary of the ending of WWII, Thelma and Joe returned to the Europe to retrace the route of the 1st Army Headquarters and his war experience.

As was mentioned we’re embarking on a new approach that would bring about a heightened awareness to the forthcoming publication and more video excerpts and possibly the beginning of a podcast that would go into further detail recounting the Life of Joseph Sefekar and his impact on the lives and places he touched.

It is particularly nice to share this with our viewers and how far we’ve come, along way since the last century when Joe Sefekar started out. There is another likeness, being here on the Cruise, corresponding with the early days of Walt Disney. Coinciding with the great technological advances, we’re able to take advantage of so much to be thankful for; indeed fortunate; it is a great part of “The American Dreamer,” and especially meaningful for those who dream about making dreams a reality. 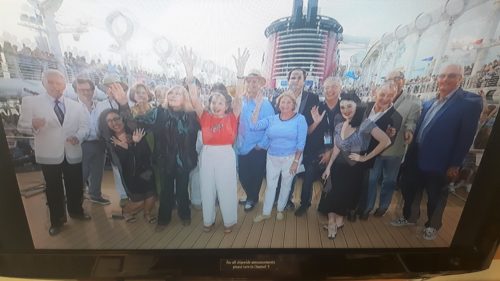 Figure #PS.39 Farewell party with some of the special guests. 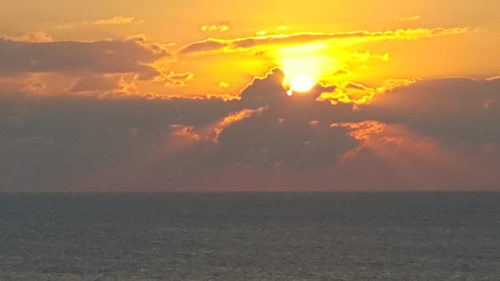