Once the dust settled down and we got into a steady day-to-day operational flow I was able to take advantage of the fact that the machinery is well oiled and in place. This was apparent from the wide range of daily announcements, editorials that came from all areas in the Washington bureaucracy; the Art World and the Media.

In this final segment the Hirshhorn accomplishment, I’m not going to leave you with a smattering of the writings describing this period but provide you with many of the wonderful letters, documents and expressions of appreciation that took place once the Museum became operational after it opened on October 1, 1974 and became firmly entrenched in the Washington scene beginning in 1975 and continuing through 1976.

The Congressional Record entry dated November 19, 1974; the Senate, from Sen. Charles Percy, (Illinois) summed up his thoughts about the opening of the Hirshhorn Museum and Sculpture Garden on the Mall in Washington. With a flourish of comments filled with criticism that had been leveled in Washington and in art circles around the country as well as reading reviews, he toured and greatly enjoyed the Museum and Sculpture Garden and believes the initial judgment on the Hirshhorn collection can be summarized in the words of Hilton Kramer of the New York Times, Mr. Hirshhorn’s gift to the nation is “magnificent” and “unlikely to be equal in our lifetime.” In my view, the greatest strength of the Hirshhorn collection is its tremendous diversity. The collector provided us with a true cross-section of great 19th and 20th century art works. With the exquisite creations of recognized Masters displayed alongside unfamiliar works of little-known artists. 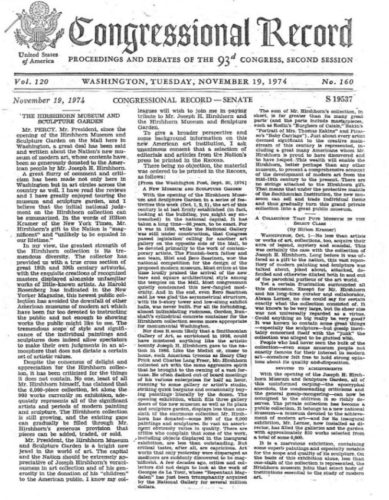 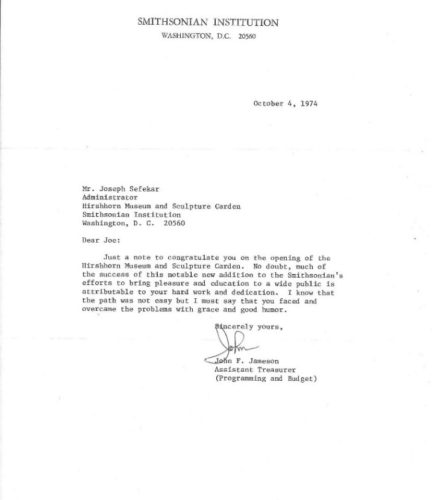 The above letter from SI Assistant Treas. John F Jamison was most kind and heartfelt giving me more credit that I would not normally receive but seeing it in writing makes all the difference. 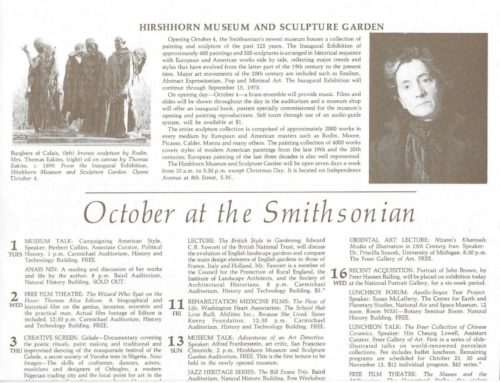 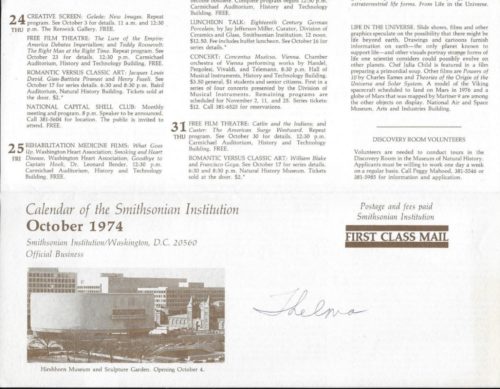 The Calendar of the Smithsonian Institution gave us an air of legitimacy. We did have our share of new activities, exhibits and we were getting into the mainstream of this wonderful way of allowing Americans and world visitors to enjoy and enhance their knowledge of so many facets of our life and history. The staff was up to the challenge of keeping current with the myriad of art related functions that we were planning over the course of the next few years.

The next target was the Bicentennial for the United States that was looming less than two years away. One of the things that I would take an interest in was the building and construction of another eagerly anticipated new Museum that was bound to attract a lot of attention. The Air and Space Museum was scheduled to kick off during the Bicentennial activities over July 4th holiday. I did have a number of assignments that would keep me apprised of how things were taking shape across the street.  The proximity to the Hirshhorn Museum made it a no-brainer that we needed to be involved and actually share what we had learned from our “meteoric rise” and getting the Hirshhorn started, worked on and completed. It also afforded me the opportunity to come in contact with their newly rising stars that would play an important part in seeing this sparkler also become a fixture on Capitol Mall. The newly appointed Curator for the Museum was none other than Mr. Michael Collins, of Apollo 11 fame (Commander, Lunar Module) of which I kept Memorabilia that appears in the previous chapter. I relished this opportunity to impart some of my knowledge and experience knowing what it was like to be a fledgling, new kid on the block. It was an exceptional event and Thelma and I were glad to be part of it.

But this did not keep us from getting our first major, eye-opening exhibit ready to make our own contribution to the American Bicentennial. The plan was put into place to acknowledge the contribution of the “Immigrants’” over the last 100 years that have come to our shores with the emphasis on Immigrants’ Art Influence.

With all the hoopla today centering around immigrants and immigration we shouldn’t lose sight of how much we owe to the millions, upon millions, upon millions who would be considered refugees that came to this country as a last resort; and not just “ARTISTS – IMMIGRANTS OF AMERICA.” One of the things that I was most proud of was the Golden Door publication dealing with ARTIST- IMMIGRANTS OF AMERICA, 1876 – 1976. Part of the Hirshhorn Museum and Sculpture Garden exhibit and publication; May 20 through October 20, 1976. One of the numerous articles as early as the turn-of-the-century appeared in the New York Times and deals with the heading “Immigration Record Will Be Broken This Year; 1906.”

What makes this so prophetic is that part of this newsletter about the Golden Door is the reflection on what figures to be its personification of “Liberty.” At the base of the statue at the entrance to New York Harbor symbolizes the immigrants’ expectations. On Lady Liberty’s base was inscribed the words by Emma Lazarus’ closing verses: Patriotic sentiments:

…Give me your tired, your poor, your huddled masses yearning to breathe free, the wretched refuse of your teeming shore; send these, the homeless, tempest-tossed to me: I lift my lamp beside the Golden door! 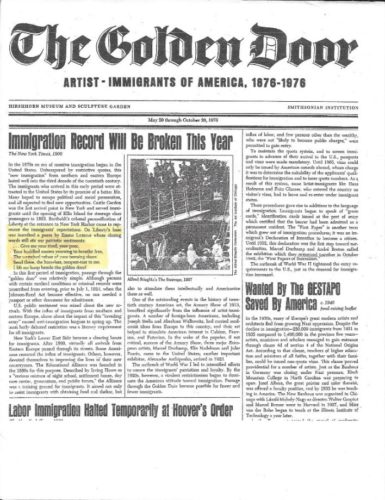 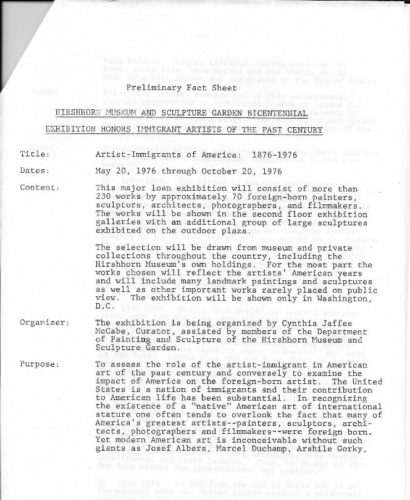 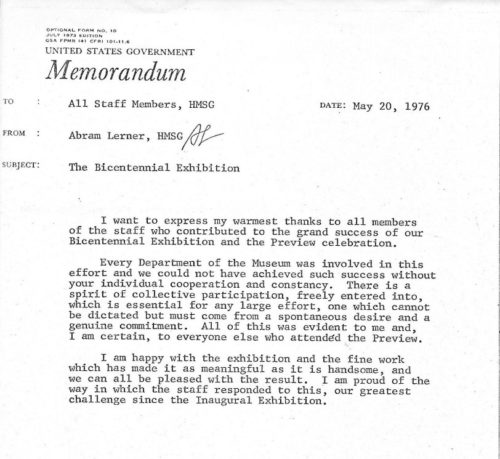 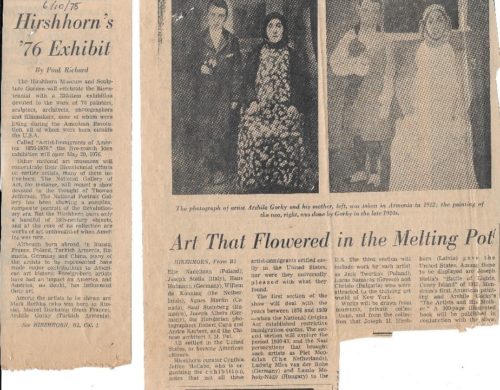 Their acceptance was a cyclical thing; the immigrants’ lot would go through periods of increases and decreases. In the article, the last paragraph states “the outbreak of World War I led to intensified efforts to assure the immigrants’ patriotism and loyalty. By the 1920s, however, a virulent restrictionism began to dominate the American attitude towards immigration. Passage to the Golden Door became possible for fewer and fewer immigrants.” How ironic that things haven’t changed much during the passage of all these years.

The Bicentennial exhibit proved to be a huge access. There were many parties to attend, over 20 celebrations; I would be there. Staff was warranted their own acclamation. I was constantly working on good employee relations: Jim and superintendent Frank; Lee getting the OK to work at home.

The list of current staff members evoked a tumultuous roar of pleasant memories. June 10, 1970 my starting date was safely ensconced between hiring the first staff members Frank and Francie in 1970. Ms. Sewall and Assistant Curator Stephen Weil, “who likes to rock boats.” The great cataloguing by Anne in the library; my final interview with JHH in 1970 before officially starting. I had developed a pretty good bond with Al Lerner over the years and as I could see the light at the end of the tunnel, there were some things that Thelma and I wanted to impart to Al and Pauline Lerner to show them how much all their good tidings over the years meant. So we came up with something that reflected our utmost appreciation. 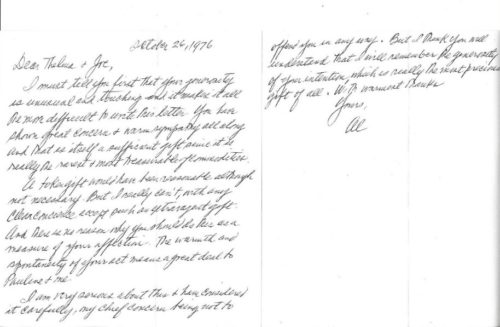 I must tell you first that your generosity is unusual and touching and it makes it all the more difficult to write this letter. You have shown great concern and warm sympathy all along and that is itself a sufficient gift since it is really the rarest and most treasured of commodities.

A token gift would have been reasonable although not necessary.

But I really can’t, with any clear conscience accept such an extravagant gift. And there is no reason why you should do this as a measure of your affection. The warmth and spontaneity of your act means a great deal to Pauline and me. I am very serious about this and have considered it carefully, my chief concern being not to offend you in any way. But think you will understand that I will remember the generosity will remember the generosity of your intention, which is really the most precious gift of all. With warmest thanks

Figure #9-27 Letter of Thanks from Al Lerner 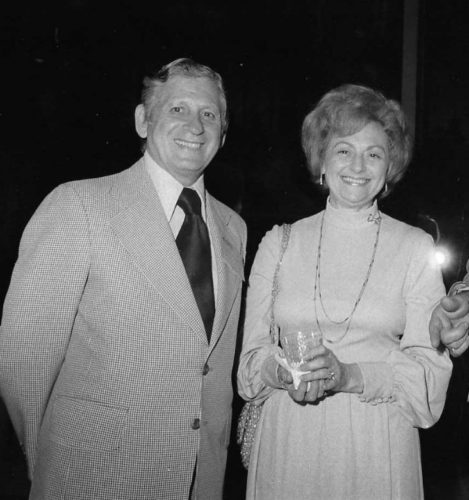 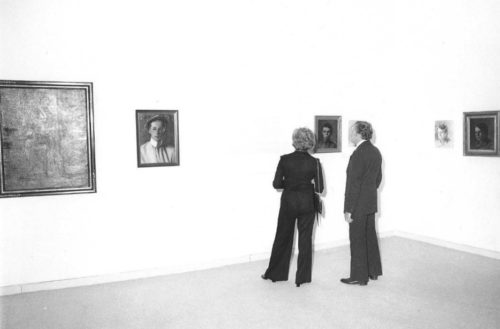 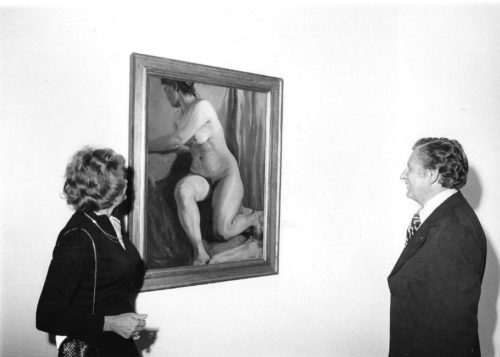 Figure #9-29 and Figure #9-30 The Bicentennial celebration afforded Thelma and me and to revisit some of the galleries and exhibits. 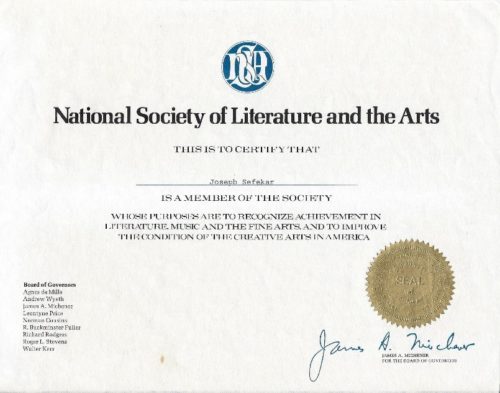 I kept current with activities for the Arts while preparing my leave-taking. Particularly, involvement with the National Endowments For The Arts (NEA). It would set in motion a ripple effect that would serve me well even after retiring from the Hirshhorn. This link would provide the next Jewel in the “Triple Crown.”

Two amazing milestones that took place during this period were my entry in America’s Who’sWho in Government and being recommended for the prestigious Rockefeller Administrative  Award.

In July 1976, I was happily surprised to see that my submission of a biographical sketch was accepted by the publishers of Marquis Who’s Who in Government and included in the 2nd edition, 1975-76 in the publication of the same name.  I record the entry below because of its simplicity and brevity, and the concise manner in which it reflects the highlights of my family history, schooling record, my occupation, my army career and service with the Hirshhorn Museum. 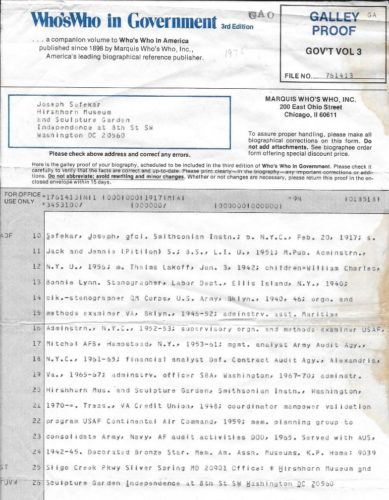 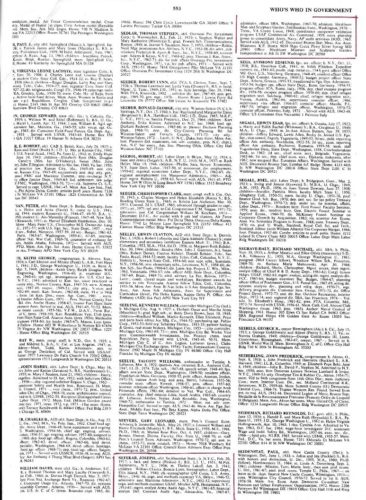 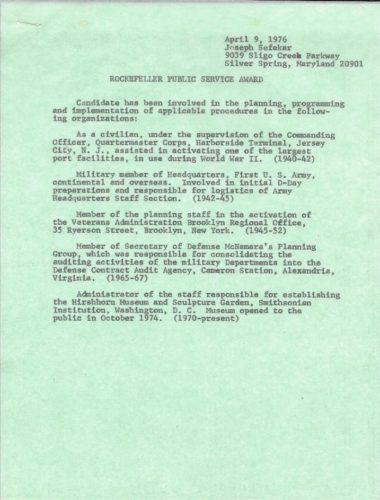 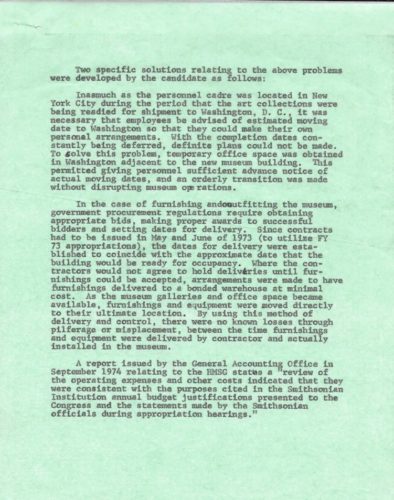 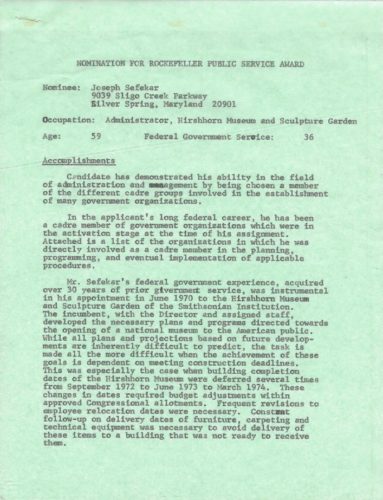 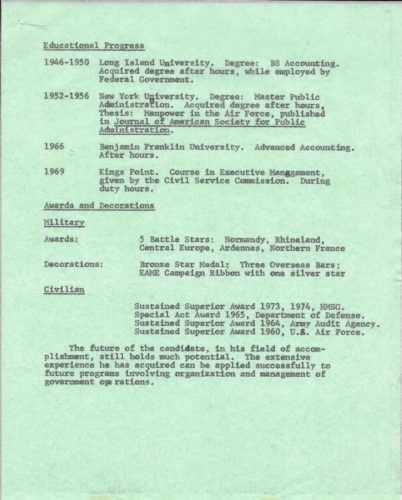 On April 9, 1976, Abram Lerner, Director, HMSG put my name in for Nomination for the Rockefeller public service award. He based this on my length of public service, dedicated career to the Federal government and to recognize distinguished service and contribution to the growth and prestige of the Smithsonian Institution. The above application states why he felt this was justified. 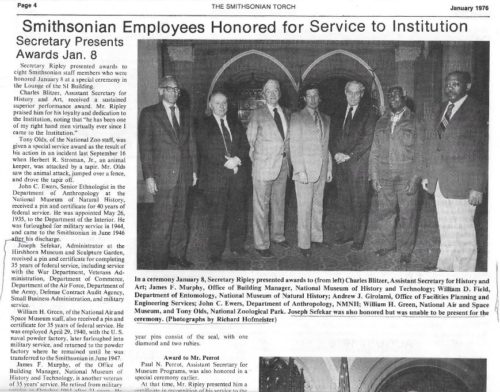 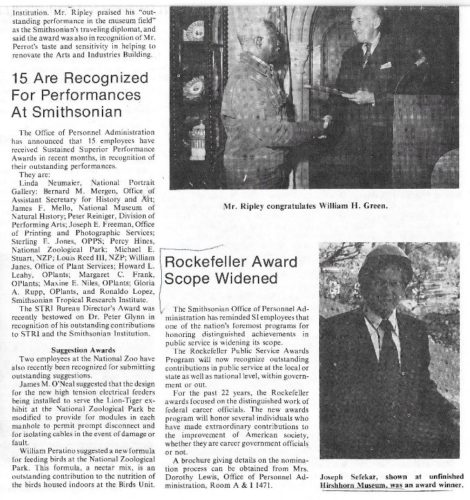 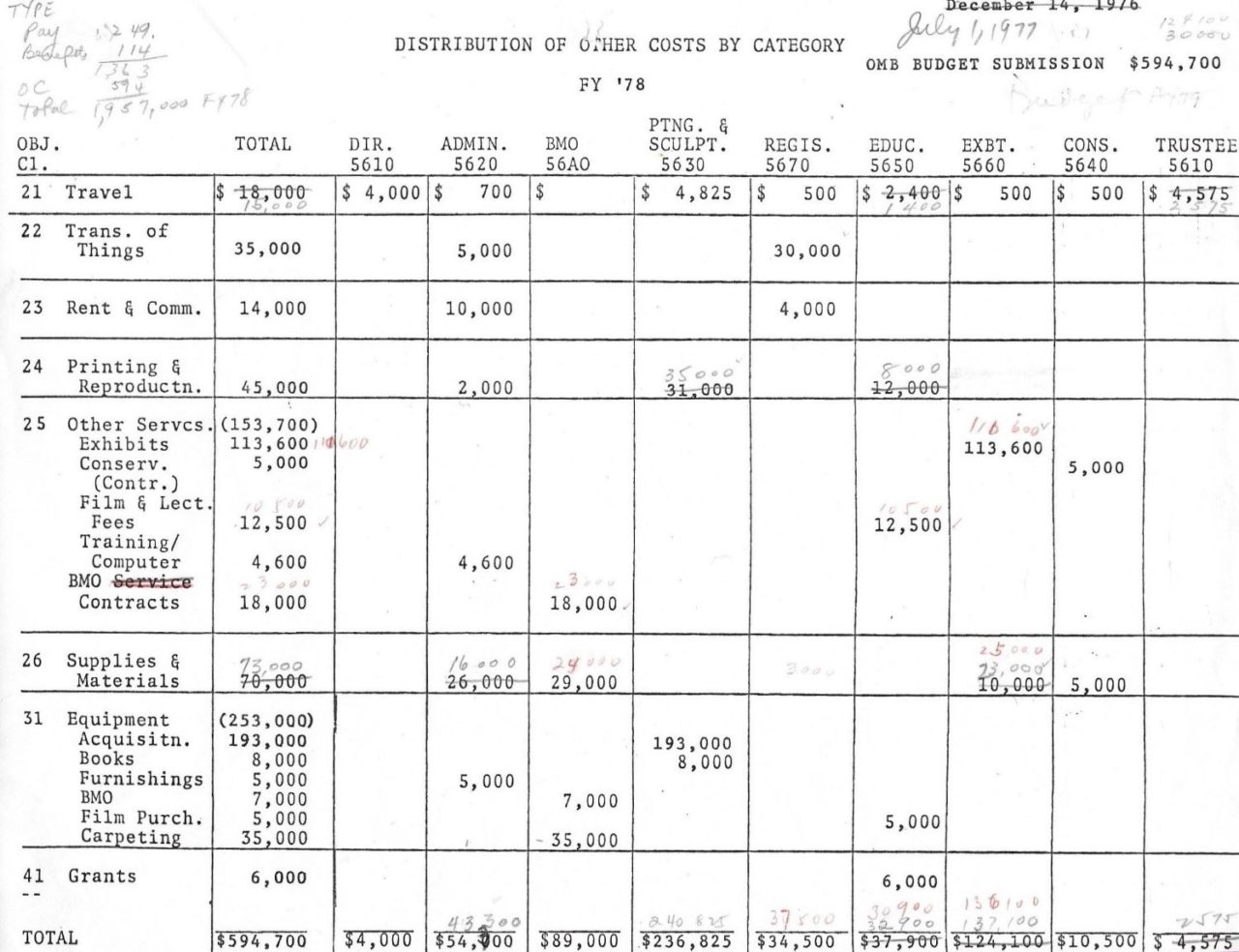 One of my last the last Budget Submissions for FY 77; it would become effective the following year.

In order to complete an accurate picture of the many facets that go into preparing, designing, constructing, opening, operating and ensuring the successful life of such an edifice as the Hirshhorn Museum and Sculpture Garden: it required an integrated, dedicated staff and certainly the appropriate amount of resources, financial and otherwise to bring this to fruition. I was certainly blessed by being surrounded by overqualified, over-achievers – Staff both above me, besides me and under me.

Coupled with the fact that Thelma was really my right hand and very supportive, as well as developing into a most “talented artist” in her own right, there was no way that I could have failed to accomplish what I was required to do. 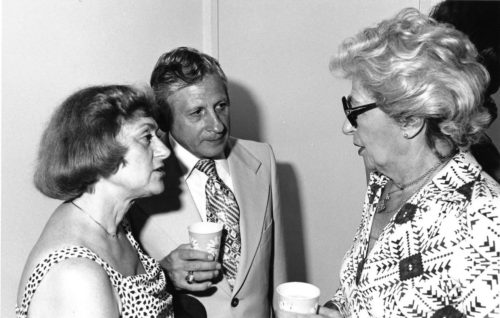 The next posting will address my leaving the confines of the Hirshhorn Museum, the Marvelous going away party, as well as leaving behind many of the wonderful friends we cherished at work and the ones that we made along the way, over the past 12 years. The road ahead would bring new challenges, fond memories and even equally great accomplishments.